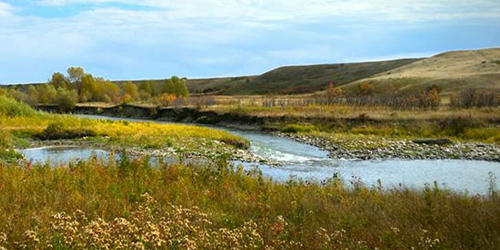 The Judith River begins its march to the Missouri high in the Little Belt Mountains near Sapphire Village.  Running a total distance of 125 miles, this gorgeous river cuts through scenic agricultural valleys and broad, arid plains providing abundant habitat for wildlife and water for crops and livestock.

The river was given its current name by Captain William Clark for his sweetheart, Julia (Judith) Hancock.  On May 20, 1805, Clark marveled at the clarity and beauty of the river and christened the waterway the Judith River, in honor of the young lady back home in Virginia he hoped he would marry someday.  In fact, in January of 1808 William Clark and Julia Hancock were married.  Julia’s name was also bestowed upon the nearby Judith Mountains and the Judith Landing at the confluence of the Judith and Missouri Rivers.

Before Captain Clark waded in the clear waters of this Central Montana river, Meriwether Lewis had named it the Bighorn River and prior to that the Crow tribe referred to this waterway as Buluhoa’ashe or Plum River.  In the 1880’s, the Judith River supported two large ranching operations: the DHS Ranch and the PN Ranch.

The Judith River is home to a diverse fish population including Brook Trout, Brown Trout and Rainbow Trout found on the upper end.  More warm water species such as Channel Catfish and Mountain Whitefish are found on the lower end.  Access to the river is limited at best.  Upstream from the town of Utica you will find various spots where the Judith River Road parallels the river.  The best access in the middle portion of the river is at the various bridge crossings and because of its remoteness, access to the Lower Judith River is minimal.  Striking white cliffs and unique rock formations make this an excellent canoeing river but floaters should be aware of fences crossing the channel.  For more information about the Judith River contact Montana Fish, Wildlife and Parks at 406-454-5840 or at http://fwp.mt.gov.