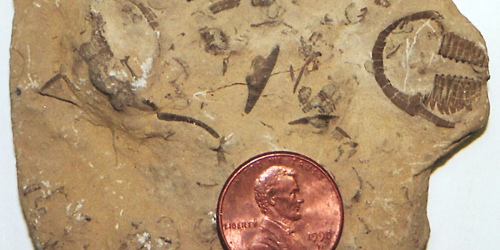 Geologically, Lewistown starts at the Jurassic-Cretaceous boundary of 140 million years ago.   Its identifying markers are coal seams that are part of the Lewistown-Great Falls coal fields, which provided early 20th century coal to the area before becoming less economically feasible.  The beds surrounding the coal contain some plant prints of ancient redwood forests and ferns, as do the blocky outcrops of sandstone.

Traveling out of town towards the Big Snowies fifteen miles away, the sediments of the land rise, and the streams flowing out of the mountains cut into older rocks.

The Morrison formation, one of the most productive dinosaur deposits in the world, can be found locally.  It is thin but has produced some bones, recently including a Stegosaurus and sauropod.

At 230 million years you can find the world famous Bear Gulch Formation which has been producing perfectly preserved sharks for many years.

Heading out of town toward the Missouri Breaks, the land generally is younger, and mostly Cretaceous.  The black shales of several formations are all marine sea bottom.  The weak shales form slumping hills that erode easily and expose a variety of sea creatures.

Most common fossils are clams which can be up to half a meter across.  Less common are ammonites and their straight variation bacculites, and rarer still are vertebrates found in the form of shark’s teeth and the occasional mososaur bones.

Sandwiched between these shale layers are the most famous deposits in Eastern Montana, the Judith River and Hell Creek Formations.   Both are stream and delta deposits, indicating the sea levels rose and fell in relation to the land at this time.  The fossils of these formations bear witness to the swampy delta environment.

Fossil wood is abundant and of the type found in warm swamps like Cypress.  Turtle shell fragments, alligator remains, lizard teeth, fresh water fish scales, and other remains indicate wetland marshes.  But most famously, the area holds dinosaur bones, including the many of the most recognizable of all like T-rex, triceratops, duck-billed hadrosaurs, thick skulled pachycephalosaurs, and many more.

As the sea left Montana for good 60 million years ago, it left numerous plant remains, now seen as plant fossils and coal seems throughout the region.  Some reworking of local rocks in the last few million years has also left some scattered mammoth, camel, and saber-tooth cat fossil remains. All fossils and formations mentioned are within 1 - 2 hours  of Lewistown.

Some fossils require special permission to collect, others do not.