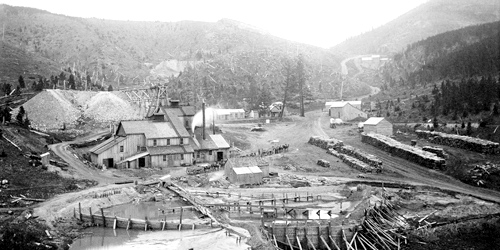 Following the demise of Custer’s Seventh Cavalry in June of 1876 and the Nez Perce campaign through much of Montana in 1877, pressure was brought to bear on Montana’s Territorial delegate Martin Maginnis to provide military forts to protect the growing influx of settlers including ranchers, miners, and merchants. Longtime associates of Maginnis were persuasive in convincing their old friend of the need for a fort in central Montana which would, incidentally, contribute to their personal business gains. The fort was established in 1880.

One hundred ninety four skilled craftsmen from the east were hired by government contract to construct the fort near the eastern side of the Judith Mountains. Civilian contractors began their work in July of 1881, completing the task by November of 1881. The presence of Fort Maginnis provided a number of advantages to the areas adjacent to the military reservation. Besides the obvious purpose of protecting the settlers from Indians, therewere the economic benefits, healthcare and the social life that the men of the fort enjoyed with their new neighbors.

Theatrical presentations, orchestral music, regularly held dances, and similar gatherings were popular with men and women from the nearby mining town of Maiden and ranches in the area. By 1886 some 266 enlisted men and officers served at Fort Maginnis. Some accounts indicate as many as five hundred people occupied the fort. Fort Maginnis was a grand design of enlisted men’s quarters, a commissary store, a bakery, guardhouse, clerk office, a chapel, a school, blacksmith shop, hospital, and a number of other buildings.

The post store was especially popular with both the military and the civilian communities. The telegraph was in use as well, enabling law officers in gaining an advantage on the criminal element. After ten years of active service, Fort Maginnis was abandoned on July 10, 1890. The mere presence of Fort Maginnis seemed to provide much of its intended purpose as a ready protector to those in the frontier environs of Montana.

Most of the buildings were eventually moved or salvaged from the site. At least two buildings stand in Lewistown today and many others were used for building the town of Gilt Edge (1893). Little can be seen at the site unless one walks it for a closer look at the numerous building foundations. The Fort Maginnis Cemetery (the famous cowboy E. C. (Teddy Blue) Abbott is buried here) is located on a hill about four tenths of a mile west of the site. The entire site is managed by the Montana Department of Natural Resources and Conservation through the Lewistown office.